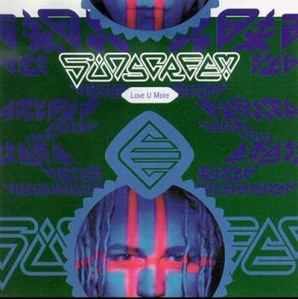 Before L and I got together we knew of each other as we had mutual friends and frequented the same pubs in our hometown, strangely however, very rarely were we in each others company, apart from me gate crashing the odd party at her house when out my face.

About 18 months before we started going out she asked me if I had this record and would I tape it for her. It was Sunscreem – Love U More, I did have it and said that I would record it and bring it to the pub the following week.

Sunscreem are described in Wikipedia as a “techno/house band”, however I would describe them as a pop house group who employed some great remixers. I bought Love U More due to the fact that it was mixed by Boys Own (Farley/Heller) then bought the second twelve for the Slam mix.

So when L asked for me to tape the track she really didn’t know what she was letting herself in for. I recorded all 9 of the mixes and filled the C90 up with similar stuff, Secret Life, Fire Island etc. How was I to know that L wasn’t into dance music, just happened to like that song.
I eventually found out a few years later, when I asked her about the tape. It transpired that she didn’t like the mixes that much and went out and bought the album on cd in order to have the correct version, now there is a novel way in which home taping made somebody buy an album.

I lost interest with Sunscreem after buying the 2nd single Perfect Motion for the Boys Own and Leftfield mixes.

This entry was posted in 2nd Summer of Love, Sunscreem. Bookmark the permalink.