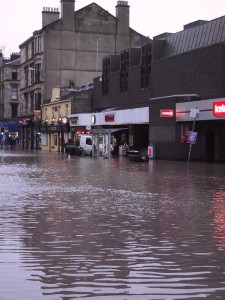 I had one of those strange moments today when you start to question whether your iPod has become a sentient being.

I had reason to be in the West End of Glasgow for work today and decided to visit the Oxfam music shop on Byres Rd during lunch, as you do. Just as I was turning into the car park above Somerfield, Dear John by Eugene Kelly came on the iPod.

For those of you not familiar with the song, it’s subject matter is the disgust that Kelly feels about the transformation of Glasgow’s best book shop (John Smith’s on Byres Rd), into a corporate coffee house.

Before I was aware of this song I used to rant to L every time we were up the West End about, how the demise of John Smith’s was a criminal act and that the weegies would soon rue the day they turned it into a coffee house, etc, etc, etc. John Smith’s was not just the best book shop in Glasgow, the 2nd floor also had an extensive vinyl section.

On several occasions I was able to pick up limited editions when Fopp up the road (still an indie at the time with loads of vinyl) let me down, New Paths To Helicon 7″ being one.

On another subject Mathew from Song By Toad sent me what is possibly the most beautiful bit of music I have heard so far this year, Nothing Broke by Meursault. It is an acoustic 5 track ep which is limited to 300 copies, so if I were you I would go here and order a copy immediately to avoid bitter disappointment and resentment later on, Mathew may even send you a lovely postcard along with the cd, mine’s was of Gannets.

I haven’t mentioned Meursault yet here and I’m not sure why not. I bought the album last year and flogged it to death for ages as it is one of the most original albums I have heard in ages. A possible reason is due to the fact that I haven’t yet caught them live, every time I hear they are gigging I’ve got something else on. A case in point being tomorrow night, the 7th May when they will be at the Bowery in Edinburgh, bugger!

This entry was posted in Eugene Kelly, Meursault, Mogwai. Bookmark the permalink.