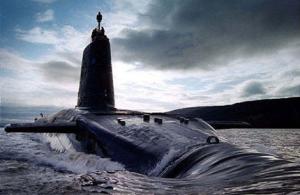 I’m going to go on my first anti-trident march in years today.

It’s quite depressing to think that the first time I marched against Trident was 25 years ago in Barrow in Furness where they were building the submarines which would launch the missiles. Since then there have been numerous visits to Faslane, Coulport and other places.

It has always seemed like lunacy to me that we posses a first strike weapon in the name of a deterrent and so we can keep our seat at the big table. It’s about time that our government realised that having these weapons does not enhance our status in the world but actually encourages other nations in their attempts to get their own nuclear weapons.

In the current economic crisis when the reality is that public services will have to be cut then surely the first thing to go should be the replacement of a weapons system that we will never be able to use without the say so of the good old US of A and more to the point morally should not even entertain the notion of using?

Here are a couple of tracks that stick in my mind from that first anti-trident demo a long time ago.

This entry was posted in Bob Marley, CND, FGTH, Trident. Bookmark the permalink.

3 Responses to No To Trident