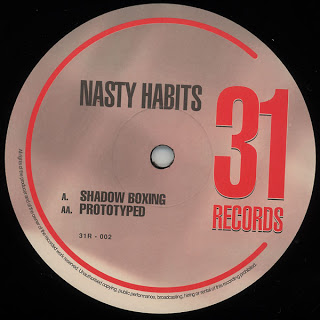 Not the sort of thing for a Sunday but as I’m typing this after having friends for dinner and indulging in  a few too many glasses of Cloudy Bay and a rather fine XO Cognac, courtesy of a birthday present from my little brother, what the hell.

For years I sought out the original of Shadow Boxing by Nasty Habits. I bought the remix a few months after it came out and loved it and always thought, if the remix is this good what must the original sound like. I had never heard it in it’s entirety,  only mixed in with other tracks, drum and bass was never that big up here. So for years I looked for the 12″ but whenever it came up on ebay I was always out bid and on Discogs it was always a bit too rich for my liking, until one night after a few I decided that it had to be purchased.

When the 12″ arrived and I played it I felt somewhat disappointed  as it was not nearly as good as the remix,  a view that has not changed since.

Shadow Boxing is probably the definintive drum and bass track for me and also probably one of the darkest tracks I’ve ever heard.

I’ve posted both the original and the remix and would be interested to hear what people think. I know that drum and bass isn’t everybody’s bag but give them a listen.

This entry was posted in Nasty Habits. Bookmark the permalink.