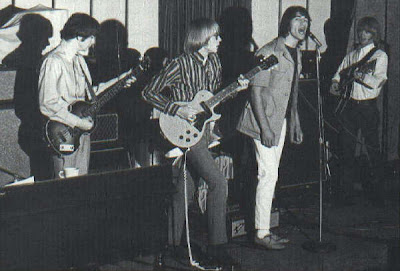 When I was about 16 I was given a compilation tape by a mate, the likes of which I had never heard before. It was filled of exotic stuff by the likes of H.P. Lovecraft, The Stooges, Love and other such late 60s gear. This was a whole new world to me one which would I would remain rather distant from for quite a few years.
Not because I didn’t like the stuff, on the contrary I though that it was all quite weird and wonderful but like Northern Soul rare and rather expensive. I had to content myself with what was on that tape and a subsequent two from the same source.

Over the years, once this kind of music became more accessable due to the re-release of the Nuggets albums and further compilations I now have quite a bit of what you would call psych, I am by no means an expert on the genre but there is not much that I have heard which I didn’t like but the track that I am posting today is still my favourite, it was on that first cassette and it took me about 20 years to track down on vinyl but it still sounds as good to me now as it did way back then when all I wanted was a paisley pattern shirt, a pair of wrap around shades and some Chelsea boots.

The Chocolate Watch Band – I’m Not Like Everybody Else

This entry was posted in chocolate watch band, Psych. Bookmark the permalink.