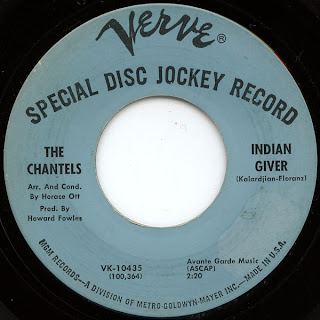 Here is a brilliant ultra rare soul track to start off the week.

Indian Giver was released on Verve in 1966 and that’s about all I know about it. The Chantels started in 1956 and recorded for a few different labels from then until 1970 when they released their final single. The lead singer Arlene Smith recruited some new blood during the 70s and resurrected the group who are still performing now.

Sorry for the quality of this mp3 but I have been so far unsuccessful in acquiring Indian Giver on 7″ or as part of a compilation album, the rip posted was one I found a few years ago on the net.

This entry was posted in soul, The Chantels. Bookmark the permalink.