People Believe Me, That Man Is Mine 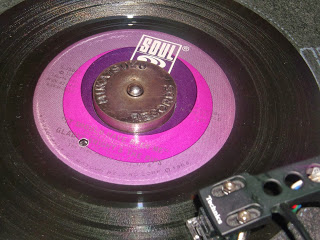 On Saturday I went to the Barras for the first time in ages. I have to admit that it didn’t have the buzz or the number of people milling about that I remember, Not sure if it was a quiet Saturday or if the place just isn’t as buy as it used to be.

I was there to attend the first Scottish Independent Label Market which was rather good. There were about two dozen stalls representing the great and the good of the Scottish indie record labels and some from south of the border. I picked up a few interesting things from the Optimo label and a rather lovely piece of vinyl from the Vinyl Factory. I also had a conversation with William Collins at the AED stall on the new Roddy Frame album which I was informed was coming together nicely and all the while during the conversation and my time at the event Will’s father, up on the balcony spun some excellent northern soul tunes with the odd Velvet Underground  and other hip 45s thrown into the mix for good measure. On my way out I chatted to Mathew, always a pleasant experience at the Song By Toad stall then got back on the scooter and rode home.

On the way back I began to reminisce about my visits ti the Barras when I was younger. We used to go in on the scooters about once a month if not more when we were younger, some just to pose with the scooter and have a drink in that most unhygienic of Cafes,  the One Up,  other to see what bargains there were to be found. Me, I always headed to the dodgy Revolver Records stall to see if there were any new bootlegs worth buying and then a trawl through the other second hand record stalls. There was one stall in one particular shed that had more soul 45s than the rest, ranging in quality from almost mint to totally fucked.

On one particular occasion I remember asking the stall owner if he had It Should Have Been Me by Yvonne Fair to which his retort was “Why do you want that, your bird dumped you?” Needless to say he didn’t have it.

For ages I thought that the Yvonne Fair version was the original version, possibly the only one as I had never heard any other. However a few years back I learned that Gladys Knight and The Pips had recorded the song some eight years prior to Fair’s top 5 hit in the UK and then not so long ago I found out,  that Kim Weston had originally recorded and released the song back in 1963. I am not as fond of her version as I am of the other two but ask me which of the two I prefer I don’t think I could choose, I love both of them. I have posted the Gladys Knight version as this is probably the lesser known of the two.

Gladys Knight and The Pips – It Should Have Been Me