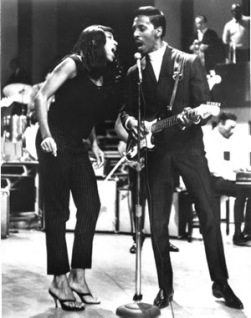 I was listening to this track at the weekend and thought that I should post it and then I realised that I already had, nearly four years ago so I think that a further airing is justified.

Here’s what I wrote back then

The only positive thing that I can find in the weekly air travel that I am currently doing is that I get to listen to lots of music. It gives me time to listen without interruption and fully to the latest releases that I’ve purchased or sometimes to just what is thrown up when the iPod is on shuffle.

This week the shuffle picked a song by Ike and Tina Turner that I don’t think that I have ever heard before or if I have I never took much notice of it, although I must have had the track for at least ten years.

Tina Turner always conjures up negative connotations for me. When the name is mentioned I think of big hair, the terrible end to the Mad Max series of films but above all one side of the auld firm due to their appropriation of that terrible symbol of all that went wrong with soul music in the 80’s, Simply The Best.

However, when you look back to the stuff that she produced in the 60s and 70’s on the Sue label with her then husband and all round bad bastard Ike it is rather good soul music and she did have a great voice.

The track which came up on shuffle was one of the tracks that the Turners recorded during the sessions with Phil Spector which produced River Deep – Mountain High.

A Love Like Yours (Don’t Come Knockin’ Everyday) was recorded in 1966 and was released on Phillies Records, the 135th release on the label. It is full of the bombast and wall of sound that you would expect from a Spector production. My copy is on the 4 cd boxset Back To Mono which is the definitive compilation of the convicted murder’s work.